The Commerical Impact of Extreme Weather

Being in the business of disaster recovery, we take note anytime a business preparedness survey is released. This particular report which included businesses located in the South West and conducted 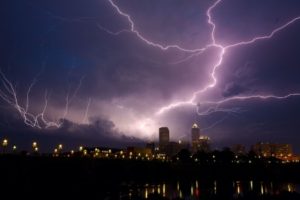 by Climate SouthWest is particularly interesting.

The study discovered that 8 out of 10 businesses confirmed that they had been affected by extreme wet, cold, hot, dry or stormy conditions. One respondent even said, “Heavy rain and strong winds greatly reduce my IT effectiveness. This can be, albeit temporarily, catastrophic.”

Survey respondents cited more impacts from snow, frost and ice than any other weather types, complaining of restricted access to their business as the most common effect, but also noting damage to property and traffic related incidences. Certainly this came as no surprise to our office as the last two winters have been bone-chilling in this part of the country, and we had more than our fair share of widespread disruption of all kinds due to a healthy dumping of snow and ice.

But what we found particularly disturbing is that despite more than one-third of respondents stating that they had experienced extreme weather related issues in the past – including losing customers, incurring repair costs and a plethora of health and safety issues — many have done nothing to prevent the business interruptions in the future.

Thankfully the news wasn’t all grim. Some businesses are reviewing their health and safety procedures, creating or improving their Business Continuity Plans and seeking further advice in order to prepare themselves for future extreme weather. Survey participants said information on weather and climate, financial grants and general advice would help them prepare for impending extreme weather.

Winter storms can range from a moderate snow over a few hours to a blizzard with blinding, wind-driven snow that lasts for several days. Many winter storms are accompanied by dangerously low temperatures and sometimes by strong winds, icing, sleet and freezing rain.

They include a number of checklists of things you can do to prepare for the onslaught of winter both at home and in the office.