Why Five Nines Uptime Means You’ve Made It

Some people may say they’ve made it once they nab a six-figure income or four-car garage. Others might measure success by the quality of their friendships, or the fact that their name showed up as a “Jeopardy!” question. While the definition of success can vary widely from person to person, there’s a constant gauge for success in the high-tech arena.

That gauge is the number of nines you can boast when it comes to your uptime. And Global Data Vault officially “made it” in September, boasting the remarkable uptime for our backup platform with five of those nines.

Five 9s is a huge deal when it comes to uptime – a level high enough that customers don’t even have a clue that any downtime happened at all. Actually, customers wouldn’t have been impacted if there had been more downtime, but the fives 9s is a great achievement.

Our overall unplanned downtime clocked in at a total of 32 seconds for the month per server across all of our servers.

Our planned outages spanned 1 hour and 45 minutes, scheduled during times of minimal use. Planned outages were 15 minutes each on seven different days across five different servers, including activities such as clearing space, moving users, and a few large-customer emergency restores.

How We Did It 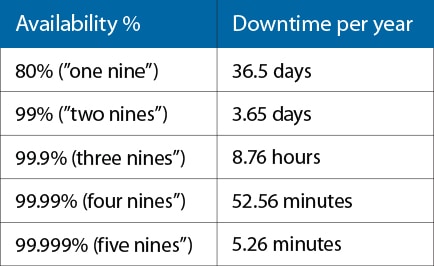 Our recipe for achieving the five 9s included:

Achieving the highest level of uptime is a feather in the cap of any cloud firm, and we’d like to share kudos with others that have achieved it. Now if we could only get our name in a “Jeopardy!” question, we’d really have it made!

Why Five Nines Uptime Isn’t the Only Goal

While five-nines uptime is a gold standard in the world of disaster recovery, it’s not the only benchmark to keep in mind when considering data security. In this video, we discuss the importance of the 3-2-1 rule and why enhanced data protection is critical.

More about protecting your data: