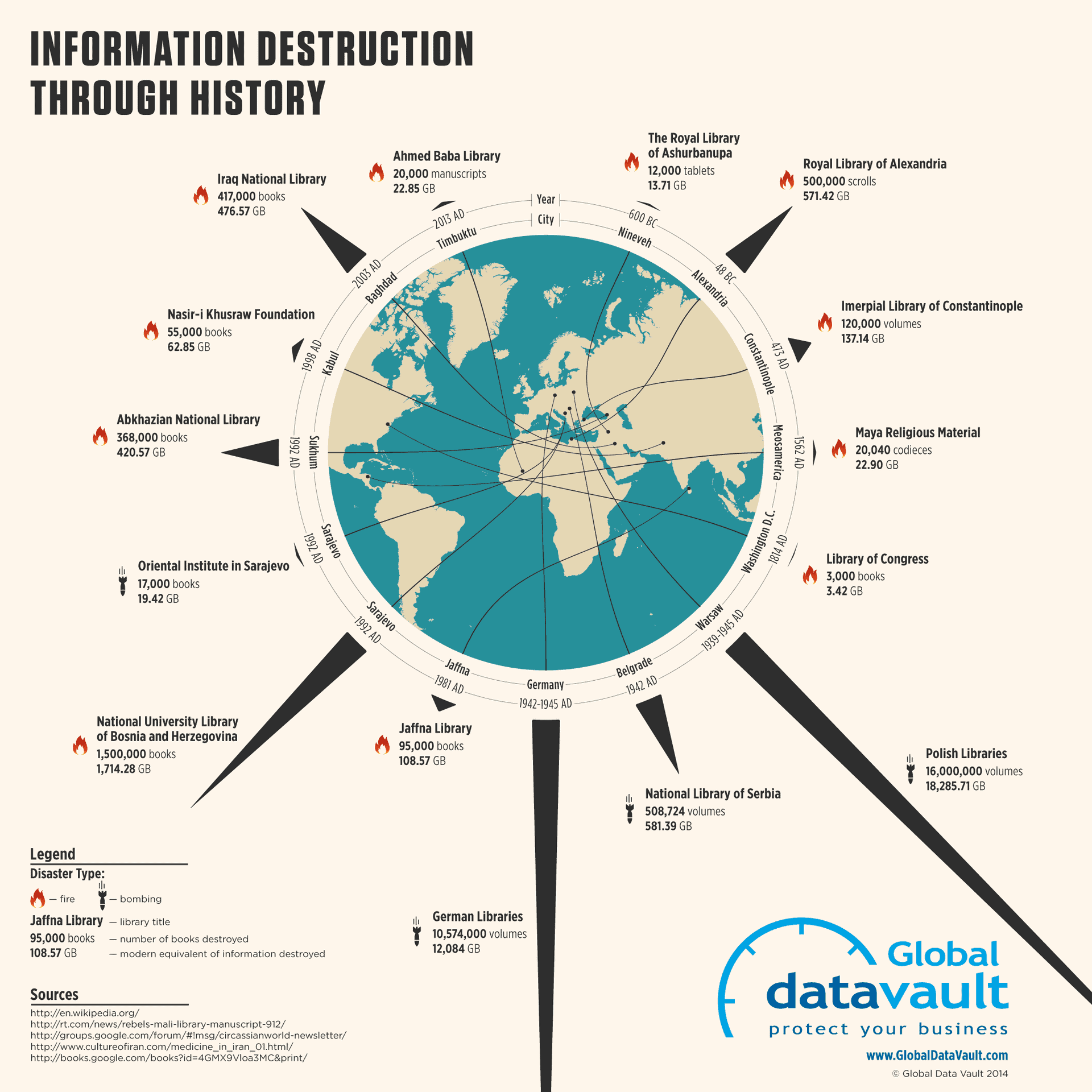 Throughout the ages, it has happened again and again. Whole libraries of clay tablets, papyrus scrolls, bark codexes, and paper books have been destroyed by natural disasters, fire, and war.

The Royal Library of Alexandria, where the accumulated knowledge of ancient scientists, physicians, and philosophers was stored, was destroyed by fire. The destruction likely started during Caesar’s Civil War when Julius Caesar purposefully set his own ships ablaze, and many scholars believe the library suffered numerous other tragic fires throughout history.

More than 120,000 volumes written by classical Greek and Roman authors were lost when fire destroyed the library at Constantinople in 473A.D.. Virtually all of the codexes recording the history, beliefs and sciences of the Maya were intentionally destroyed by the Spanish as works of the devil. In World War II libraries containing millions of books were destroyed as strategic acts of war.

During the Yugoslav Wars of the 1990s, the 17,000 volumes of the Oriental Institute in Sarajevo were directly targeted, along with the National Museum and National Library. The Iraq War saw the destruction of more than 400,000 books in the Iraq National Library, including priceless records of the world’s first urban, literate civilization. On 9/11, 21 libraries inside the World Trade Center, the records of 3,000 to 4,000 active cases before the Securities and Exchange Commission, files belonging to the CIA and EEOC, U.S. trade documents dating back to the 1840s, the offices and archives of Helen Keller International, $100,000,000 in privately owned artworks, thousands of photo negatives of JFK and more than 900,000 archeological artifacts were all lost.*

In our estimate the equivalent of 34,524.8GB of information created by humans that we can quantify within reasonable certainty has been destroyed throughout our history. We reached this figure by using data from the Amazon Kindle 3 which claims to hold 3,500 books per 4GB.

There are many well-known accounts of destroyed libraries and houses of information that we were unable to include in this figure due to a lack of reputable sources on the amounts of information destroyed. Those instances include The Library of Antioch in 363B.C., The Royal Library of Ashurbanupa in 600 B.C., Imperial Library of Ctesiphon in  754 A.D., The Library at Nalanda University in 1193 A.D., and the House of Wisdom in 1258 A.D.

As most information today is stored as electronic data, it’s not as vulnerable to fire but very vulnerable to new threats. Today’s data is vulnerable to being stolen, destroyed or compromised by disgruntled employees, competitors, terrorists, criminals, and malicious hackers. Fortunately, though, electronic data can be copied, encrypted, backed-up and stored in multiple locations, as it is being created, far easier than copying scrolls by candlelight with a quill pen, and more easily retrieved and restored in case of a disaster.

And the data destruction continues.