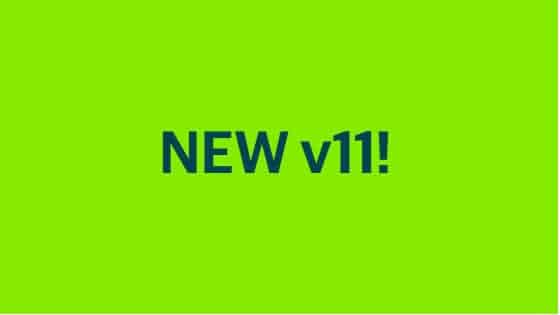 The V11 update was released in March 2021. As usual, the list of new features is extensive. Click through for a post in which we focus on the new capabilities that are important to Global Data Vault, our partners, and our customers and sign up for our Veeam V11 webinar.

After much anticipation and a long wait, Veeam®​ released version 10 of the Veeam Availability Platform, which includes the Veeam Availability Suite (Veeam Backup & Replication™ and Veeam ONE.) To be fair, many of the updates to version 9.5 have been larger and contained more features than some other products’ major version releases, but we are definitely excited for v10. For this blog post, I am only going to focus on some of the new features related to backup, and not so much for the replication side of things.

If you watched the live launch event on Tuesday, Danny Allan, Veeam’s Chief Technical Officer, talked about the challenges created by the massive growth of data that occurs yearly. With more IoT and data points comes staggering amounts of information and of course the need to protect it. File-based Network Attached Storage (NAS) is often a good choice for unstructured data, but having a hardware agnostic backup solution that can protect ALL data has been a challenge until now. With Veeam’s NAS backup capabilities, they again innovate and change the market by providing “changed file tracking” for NAS…much like Veeam innovated Changed Block Tracking-enabled backups in vSphere environments years ago. This will reduce the amount of time and traffic needed to back up a NAS device.

As a Veeam Cloud & Service Provider, we take pride in our service and how quickly we can respond to, and resolve, any restore requests. In Veeam Availability Suite v10, Veeam renovated their Instant Recovery engine, calling it “IR engine 2.0” and boy, is it faster. In a live demo (yes, live demo!) during the launch event, Rick Vanover showed the speed differences by running simultaneous Instant VM Recovery jobs on copies of the same job; one using Backup & Replication v9.5 update 4 and the other using v10. The v10 Instant Recovery was easily 4-5 times faster. For our customers, this means that much faster recovery of YOUR VMs. Veeam accomplished this feat by “intelligently optimizing the interaction with the backup storage, new caching in RAM of blocks to reduce latency, and a look-ahead, pre-fetch process for higher performance.” Competitors try to throw SSDs at the problem, but the simple fact is that the cache isn’t large enough and SSD is cost-prohibitive, so Veeam uses physical memory, which is faster than SSD or NVMe.

Adding to this new speed, Veeam introduced “Multi-VM Instant Recovery.” If you have multiple virtual machines that make up an application group, you can now select them all and perform an Instant Recovery on all of them at once. In the past, this needed to be scripted or had to be done one at a time. Global Data Vault has long since provided automated builds of an entire network for disaster recovery purposes, but this feature allows us to quickly recover multiple VMs at once from your on-premises repository.

The process of getting your data—specifically your backup files—to Global Data Vault is via a Backup Copy Job. With v10, you can now enable immediate copy functionality, meaning that as soon as a backup job finishes, the data will immediately be copied to your cloud backup repository. If you are running transaction log backups of a database, these can be immediately sent offsite for even better protection. This also reduces the amount of time it takes to send a larger amount of data during more peak times, thereby reducing backup windows and improving your RTOs.

If you saw our post about cloud mobility, you know that recoverability should be available across multiple platforms, or regardless of where your workloads exist. Veeam is making great strides with this again in v10, giving the ability to recover ANY image-based backup instantly into a VMware vSphere environment. This means physical servers or workstations, AWS or Azure workloads, AHV, etc. If you back it up with Veeam, you can restore it to vSphere. Again, Global Data Vault has been automating the re-creation of customer environments for years, but this feature is exciting because it allows us to do our job that much more easily, which saves you time should you need to instantly recover your data.

Finally, at least for this post, I want to talk about enhanced per-VM backup chain support. I mentioned the immediate backup copy functionality earlier but have been attempting to draw a picture of just how important the features of v10 are for one thing: speed. Many companies perform backups during the overnight hours, and many others run backups periodically during the day. The backup copy job—the one that gets the data to us—previously had to wait until the entire backup job completed before it could send data from that backup file. Now, the data can begin transferring as soon as individual VMs are finished within a job, so if you have a backup job with 20 VMs in it, the backup data from the first VM will begin copying to your Global Data Vault repository as soon as that VM is finished. Awesome!

As Danny Allan mention, Veeam Availability Suite v10 has over 150 new features and improvements. We’ve keyed on a few here today that are relevant to us and our customers and will continue to innovate in our own space with these great tools Veeam provides. Stay tuned for some news around Ceph storage and how GDV will use object-based functionality in the near future.